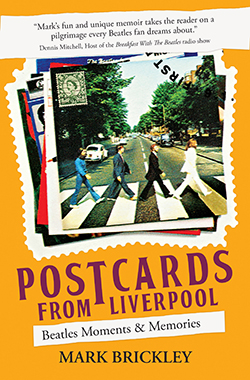 The book’s forty photographs include Paul McCartney, Ringo Starr, Pattie Boyd, Ravi Shankar and Beatles’ sites in the USA, London and Liverpool including the Cavern Club. There are six rare backstage interviews, a panorama of the Beatles 1968 trip to Rishikesh, India and side trips to Ringo Starr’s Grammy Museum press conference and Paul McCartney’s Hollywood Walk of Fame Ceremony.

Get your copy of Postcards From Liverpool: Beatles Moments & Memories today!

2017 “Breakfast With The Beatles” radio interview

Testimonials for Postcards From Liverpool:

Mark’s fun and unique memoir takes the reader on a pilgrimage every Beatles fan dreams about.” Dennis Mitchell, Host of “Breakfast With The Beatles” radio show

“It’s difficult to say something new about the Beatles. Mark manages to do this and tell the story in a notably clean way. Very Enjoyable!” Jon Keats, Director of Music & Events: The Cavern Club, Liverpool, England

“I was part of Beatleworld during the early days and even I have been thoroughly re-educated by Mark’s book. Its meticulously researched and the photos are among the best I’ve seen…” English Songwriter Mitch Murray (Three No. 1 Sixties Hits)